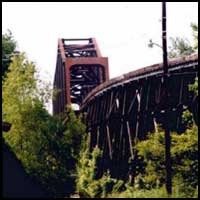 In the days before Alabama became a state, the City of Northport, which is located on the north side of the Black Warrior River across from the City of Tuscaloosa, was the site of a convenient ford for those crossing the Alabama Territory. The earliest account of white travelers using the ford was in 1771. The river was navigable for a portion of the year up to the Tuscaloosa Falls, which was located at this point. According to W. S. Persinger who wrote the "Early History of Northport, Alabama", the City became a settlement in 1813.

Captain Otis Dyer ran a ferry between Tuscaloosa and Northport and laid out the streets and lots of Northport. In the early 1800's, this area was the head of navigation with cotton warehouses located on both sides of the river. The principal market for cotton was the New England States. Cargo was carried by steamboats to Mobile and then by ship to the northern states and Europe. Generally, it took two weeks for steamboats to make a round trip from Mobile to Northport.

Traditionally, the settlement at Northport is believed to have been first known as "Kentuck" or "Canetuck". One theory has suggested that the City was called Kentuck because the word meant paradise or Shangri-la during that time. A dictionary entry of the time read "Heaven is a real Kentuck of a place." Persinger believed the name was "Canetuck" because the area was a cane-brake wilderness during this period. Nevertheless at some point in the 1800s, it became known as North Port. And why not? She had a "port" of her own on the north side of the river with equal facilities for taking care of all the cotton brought to the river from the vast territory north and west of the town. Also, the port was used for shipping and receiving freight by the river and furnishing all the territory with salt, sugar, molasses, rice, calico, whiskey, nails, plows, etc.

Northport's early history revolved around the river, but the little town continued to grow after railroads and highways surpassed river traffic in the volume of transportation. During the Civil War, Northport suffered many losses as did most Southern cities. General Craxton's raiders approached the City of Tuscaloosa through Northport and destroyed the bridge between the two cities. Northport was incorporated in 1871. The first newspaper was the NORTHPORT SPECTATOR which existed from 1870 to 1873. A pre-Civil War school was located on Academy Hill and a free school was built by Northport between Main Avenue and the Mobile and Ohio Railroad depot in 1901. The city's population at that time was approximately 600 people.

In 1920, Northport schools became part of the Tuscaloosa County School System. The next year, Northport Elementary was built "on the site of the old Robinson Race Track between the Byler Road and Crabbe Road". Today, Northport is the site of the annual Kentuck Festival of the Arts, a long established, nationally recognized event which draws people to the area from across the country. This two day event features 300 invited artists, legendary music, southern folklife and outstanding children's activities. Proceeds from this event support the Kentuck Museum and Art Center which houses the studios of six professional full time artists in downtown Northport. With a population over 20,000, Northport has been recognized as one of the fastest growing cities in Alabama.

Sorry, there are no upcoming events.